Asthma Medication and your Teeth 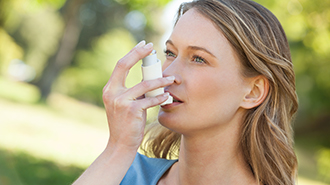 In the United Kingdom alone, about 5.4 million people are currently being treated for asthma, according to figures released by Asthma UK. More than one million of those being treated are children, including those as young as six months old. It’s a disease that has continuously been on the rise and one that causes more problems than just breathing difficulties.

Many asthma sufferers probably don’t see a connection between their asthma and their dental health, but – say studies – both excess cavities and an extreme amount of erosion are showing up in individuals who are being treated for asthma, especially those whose treatment has been lengthy or who started their treatment early.

Dry mouth tends to be at least one of the culprits related to inhaled asthma medications, in particular.

“The nature of inhaled drugs means a natural side effect is to dry the mouth out,” said Dr. Kenneth Burrell, senior director on the Council of Scientific Affairs for the American Dental Association. “Lots of inhalants are very acidic, with low pH way below what will dissolve enamel.”

Dentists explain that it’s not what goes into the lungs that causes the problem but, rather, the powdery residue that stays behind and sticks to the teeth. And because most asthmatics take their medication more than once a day, the process is repeated over and over again, often for decades. This reduces saliva, which leads to tooth decay.

In a 2002 British study, 60 children age 11 to 18 were tested and it was determined that about two-thirds of those with asthma suffered from moderate erosion, as compared with one-half of non-asthmatic children. Further research could not determine any dietary or other differences that would account for the higher erosion rate among children who took inhaled asthma medications.

So what can you do to reduce erosion and decay?

If you find that you or your child is suffering from severe dental problems, it’s not unreasonable to ask if there is an alternative to the medication being used. A less acidic inhaler formula, for example, might be suggested.

Usually, however, it’s difficult to make a medicine change, so coming up with other solutions is often the better alternative. One easy solution is to choose a toothpaste or mouthwash solution with extra fluoride. For children who drink bottled water, select one that contains flouride. (It’s important to note that fluoridated water has greatly reduced the number of cavities in children over the last several decades, so it can successfully help with this situation as well.) A prescription topical fluoride paste is sometimes recommended for children with particularly notable erosion and decay issues.

For any asthmatic trying to stay hydrated and trying to reduce dry mouth, sugary drinks are never a good option. Again, use water or even ice chips to keep your mouth moist. It might also be a wise idea to rinse your mouth with water after each puff or to chew sugarless gum after each dose as well.

Finally, adults might consider dry mouth medicines such as Biotene®, but note that most of these over-the-counter solutions may not be suitable for children. Ask your dentist if there’s an option for your little one with asthma.